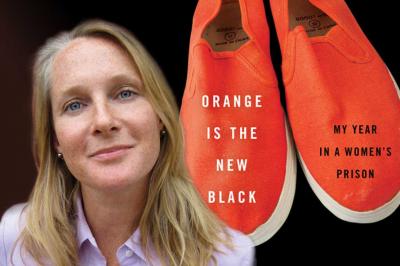 When discussing prisons, oftentimes the viewpoint is from that of a guard or warden. Thanks to former prison inmate Piper Kerman, a new outlook can be shown. With a warm welcome to the Ohio audience, Kerman shared that she teaches at two prisons in the state, the Ohio Reformatory for Women and the Marion Correctional Institution. However, she hasn’t always lived in Ohio.

Kerman graduated from Smith College in Northampton, Massachusetts, in 1992. Shortly after graduating, she turned to a life of crime. These actions would lead to a prison sentence later on in life.

Kerman described an older woman with whom she traveled the globe. This woman was involved in the narcotics trade, taking Kerman on exotic vacations. While caught up in all of the glamour of travel, she never thought she would get caught up in the woman’s business affairs. However, one day Kerman was asked to carry money from Chicago to Brussels. Shortly after, Kerman terminated the relationship and moved to California. Although she no longer engaged in criminal activity, her past caught up with her in 1998 when she was visited by the FBI. From the beginning, her lawyer assured her that a prison sentence was almost 100 percent certain.

After a lengthy legal process lasting more than two years, Kerman turned herself into the Federal Correctional Institution in Danbury, Connecticut, in 2004. Kerman recalls being intimidated by the large chain-link fences, barbed wire and rough prison guards. However, the women she encountered were kind and this reminded her that being a prisoner doesn’t mean you aren’t human. She then recited her prison identification number, “11187-424,” and gave the audience the same advice she was given while in prison, “eyes open, mouth shut.”

Kerman spent 11 months of her 15-month sentence at FCI Danbury, ending her time in a Chicago federal prison. In 2005, she was released with nothing but the clothes on her back. She offered that if it wasn’t for her now-husband Larry, she would’ve been terrified leaving prison. Kerman then shed light on the harsh reality facing women at reentry who have very few or no support mechanisms when they leave resulting in many ending up back in prison. She then went on to express her views and opinions on the U.S. prison system.

Kerman pointed out that the U.S. holds more prisoners than any other country; one-third of all incarcerated women in the world, due in part to a 650 percent increase in female incarceration in the last 40 years in the U.S. Two-thirds of incarcerated women are doing time for low-level offenses, 80-90 percent of female prisoners are victims of sexual assault before incarceration, 80 percent of felons are reliant on a public defender, and African American females are four times more likely to be arrested for marijuana possession than their white counterparts. Kerman believes that the prison system marginalizes people by not accommodating prisoners basic this is counterproductive to the concept of rehabilitation.

She ended the lecture with advice for the future. Kerman believes that people need to be more empathetic, kinder and friendlier and recognize the enormous monetary and social costs of incarceration. Through these ideals she believes that eventually the U.S. will transition away from relying so heavily on prisons.