Criminal Justice in London: The Proceedings of the Old Bailey, London 1674-1834

The Proceedings contain accounts of trials which took place at the Old Bailey, the central criminal court in London. The crimes tried were mostly felonies (predominantly theft), but also include some of the most serious misdemeanors. The first published collection of trials at the Old Bailey dates from 1674, and from 1678 accounts of the trials at each session (meeting of the Court) at the Old Bailey were regularly published. Inexpensive, and targeted initially at a popular rather than a legal audience, the Proceedings were produced shortly after the conclusion of each sessions and were a commercial success. With few exceptions, this periodical was regularly published each time the sessions met (eight times a year) for 160 years. In 1834 it changed its name, but publication continued until 1913.

The Proceedings are currently available through 1834 on the website. The website will be re-launched in Spring, 2008 with the trials through 1913.

Eric Monkkonen calculated homicide rates for London and Liverpool from official data. The rates are understated and may be unreliable, especially in the seventeenth century. 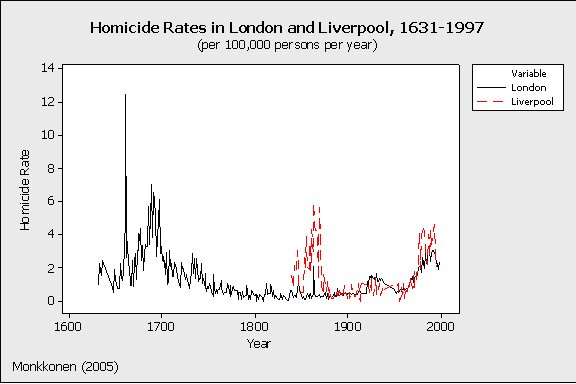 Monkkonen's data are available in the following file

Monkkonen compiled the data for his study of murder in New York City (2001). His complete data on London and Liverpool (and a list of sources) are available on the Historical Violence Database. See the file "Annual Homicide Data for Comparison Sites" on the New York City webpage.

[csv] - Some links on this page are to .csv files requiring the use of a database program. If you need these files in a more accessible format, please contact cjrc@osu.edu.