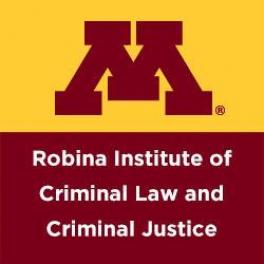 As part of the University of Minnosota campus and located at the University of Minnesota Law School, the Robina Institute of Criminal Law and Criminal Justice is a mission-driven organization dedicated to engaging in original, interdisciplinary education, research, and policy analysis to achieve transformative change in sentencing and correctional policies and practices.

A report titled, "Releasing Authority Chairs: A Comparative Snapshot Across Three Decades," has been completed. Authored by Kaleena Burke, Ed Rhine (CJRC Affiliate), Jason Robey, and Ebony Ruhland, this publication compares parole board chairs’ views at two moments in time, 1988 and 2015. It frames and seeks to answer several questions: if these public sector agencies are shaped by the leadership in place, how did the chairs respond to the challenges and issues confronting them in two surveys conducted nearly 30 years apart? Topics of discussion included the goals of parole release, the use of structured decision tools, prison crowding and risk aversion, and the opening of the parole decision process. The report also provides a comparative review of the chairs’ recommendations for parole reform.

The Robina Institute continues to post state parole profiles, an initiative guided by Alexis Watts. The goal is to describe the legal framework of parole eligibility, release, supervision, and revocation, as well as the structure of releasing authorities in each indeterminate sentencing jurisdiction. As of May 2017, nearly all of the state profiles have been drafted. Ten are currently available on the Robina website with four more soon to come. It is anticipated that the work on these jurisdictions will be finished in early 2018. The possibility of providing a comparative profile on the parole process in Canada is under consideration.

Work is also underway to produce a separate report focusing exclusively on profiling parole in those states that are considered determinate sentencing jurisdictions.

On-site work is continuing in Pennsylvania involving the state’s sentencing commission, parole board, and department of corrections. The focus of this project is to provide recommendations that will enhance the parole board’s reliance on the use of a structured guidelines tool, inclusive of risk assessments. While the tool itself is being examined, interviews have been conducted with parole board members. Similar interviews are planned with inmates subject to parole consideration. A report summarizing the views of the board members about their role and thoughts regarding the parole process is nearing completion.

Other on-site work has begun with the Kansas Prisoner Review Board involving a system’s review of the agency’s revocation policies and practices. An agreement is also near with the Georgia Board of Pardons and Paroles with an emphasis, as well, on the review and enhancement of revocation models and policies.

A report is also being prepared that is designed to encourage and provide a resource guide to assist paroling authorities in realigning their statutes with evidence-based and best practices research. This effort involves a collaboration among CSG (Cathy McVey, Carl Reynolds), the Robina Institute (Ed Rhine), APAI (Jeff Peterson), and NPRC (Richard Stroker). The report offers a series of recommendations that address selected features of statutory language for paroling authorities to consider pertaining to their organization, release decision-making and supervision. The final report is expected to be published during the summer 2017.

Two new infographics on the parole release and revocation process were recently published: "Risk Assessment and the Revocation Process" on March 1st and "The Consideration of Victims in Parole Release Decision-Making" on February 28th. A third new and forthcoming infographic will update the previously published infographic "Increasing Use of Risk Assessment Tools at Release." These infographics present data from the Robina Institute’s 2015 National Survey in a succinct and aesthetic way. Each infographic focuses on a specific aspect of parole release and revocation.

Four blogs have been posted under the parole project. They include the following topics and can be at: http://robinainstitute.umn.edu/news-views

“Defining Victims in the Context of Parole Release” by Alexis Watts

A blog posting addressing the process for setting conditions for parole or post-release supervision is being prepared for posting over the summer.