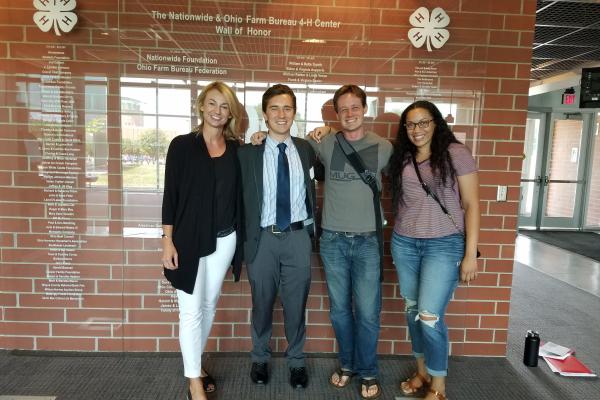 On Thursday, July 26th undergraduate student Jacob Kepes (University of Georgia, Department of Sociology) presented his  research on "Community Factors and Police-Involved Killings: An Analysis of Events in Columbus, OH (2005-2015)" as part of the Summer Research Opportunities Program (SROP) at Ohio State. He was mentored in his research by Sociology Professor and CJRC Director Dana Haynie and Ph.D. graduate students Scott Duxbury, Sade Lindsay and Paola Echave.

Below is the title and abstract for his study.

Community Factors and Police-Involved Killings: An Analysis of Events in Columbus, Ohio (2005-2015)

While research has long documented the associations between police-involved killings, race, and violent crime, studies have typically been conducted at the city and county levels, raising unanswered questions regarding whether community characteristics at a more local level (block group) are associated with lethal police violence.  The current study utilizes unique geocoded data on the incidence of police killings and Census data at the block-level for Columbus OH covering the time period 2005-2015 to determine whether particular community characteristics are associated with a greater likelihood of experiencing police killings.  T-tests indicate that police-involved killings are more likely to occur in neighborhoods characterized as having higher poverty, violent crime and black residential population.   In addition, the current study uses content analysis of newspaper articles related to police-involved killings in Columbus, OH in order to understand how the killings are portrayed in the public sphere. Findings from these qualitative analyses indicate that newspaper coverage cites the use of a weapon by the deceased to justify the killings more than any other factor, suggesting that police use lethal force in reaction to perceived threat of violence from victims. The findings from the quantitative and qualitative shed light on the community factors that play into police-involved killings.